To say that Noah's hi/lo base feeding chair has been a huge challenge this week feels like an understatement.  I called the equipment vendor Monday to arrange for help in fixing Noah's broken harness.  The secretary was incredibly rude and short with me, and abruptly told me to go out and buy an industrial size sewing machine and hunt the part myself; in addition she further recommended that I tie up Noah with a t-shirt for support in the meantime - after all she said that's what she tells everyone to do.  I told her that wasn't an acceptable solution for a chair that was only a few months old that should be covered under a warranty of some kind, nonetheless a huge safety issue for a child like Noah, and asked to speak to her supervisor.  I was transferred to a technician who assists and he eventually came out and replaced the piece on the harness and made some modifications to the chair (as it was ordered in a size that was too big for Noah).  Which meant that they needed to raise the foot rests, and find a way to pad the back to make it smaller so Noah's body wouldn't side forwarded from the extra space that was there.   A new hood came into play, they cut the foot rests shorter, and added a very hard foam block behind his back.  Noah was also self-injuring his arms on the rests due to his high tone so I ordered these really cute dog arm chair rest covers in a desperate attempt to make them softer for him.  And now to say the least Noah absolutely HATES his chair.  Hates it.  Something that was working now has become a nightmare, and I have to figure out how to piece it back together the way it was.  I'm sad and frustrated.  This chair only a month ago was a dream come true, and now that it's been tinkered with and broken, it's now become a huge headache.  The soonest that they can come out again to try to put it back the way it was is in a couple of weeks.  So in the meantime all I can think to do is try to dismantle it myself and put it back together again the best I can.  I'm not a pro, but I'll have to try.


Sometimes I really wish that it was a per-requisite to any place of employment that assists anyone disabled or with special needs to actually shadow a family like ours for a week.  To truly understand our trials, how hard just one day can be for us, to have a better understanding of how just one kind word can help us, one ounce of help and we're forever grateful.  I admit I was hurt when I spoke to that secretary on Monday.  We just needed a little understanding, compassion and help.  But the world isn't like that - especially when it comes to having a special needs child.  I don't expect that we'd be given preferential treatment, but love, care and kindness can go a very long way.

Noah's sleeping hasn't improved and we're on week two now of his new sleeping schedule.  And I keep thinking maybe our only saving grace will be the time change next month.  We're still at a loss for why he's suddenly fallen back into an odd sleeping pattern.  And even with what feels like lots of lack of sleep he's still very chipper through the day, with only the handful of typical meltdowns because he wants to play with his train or watch a different movie.

Today is my birthday, (a really unimportant detail in the circumstances of our lives) - the only great thing about it is I get this wonderful yearly chance to make the biggest wishes I can for Noah.  They will always and forever be for him for the rest of my life.  I have nothing else to ever wish for.  And Noah really does love it when people sing happy birthday.  He loves birthdays.

Noah has had a long period of really sleeping rather well through the night, but the last few weeks have been very difficult.  He wakes multiple times at night, squealing and demanding we get out of bed to tend to him.  We of course offer him a bottle, even though we know he doesn't want it, but gets more upset if you don't offer it.  You'd think he'd be very tired from being up many times in the night, but he's even starting to wake up earlier and earlier.  We go through a thousand things in our minds to try to trouble shoot things; is he sick? tummy ache? muscle aches? too cold? toddler bad dream?  And you find yourself lying there in bed just praying to God please just let him talk and tell me what is wrong.  You feel like somehow you should be equipped with some sort of telepathy and brilliant insight as his parents to figure it all out, but we just can't.  I know that Noah does have a tendency to change sleeping patterns seasonally, and maybe he's better than any groundhog out there and is simply telling us Spring is on it's way.  Whatever the cause, we're exhausted and hoping that Noah will again resume a great sleeping pattern soon.


We also recently learned of new complication to Noah's cerebral palsy.   An x-ray of his hips shows that his right hip is starting to migrate out of socket.  While his left is doing okay.  It's still early to know what this all will eventually mean for Noah.  It sounds like we have some time, to see if the hip situation will improve or at the very least not get any worse.  We're going to try a swatch brace, which we hope Noah tolerates well and work on positioning him better with his legs.  We are happy to report that his spine looks great.  In addition to the news of Noah's hip we also learned that Noah was given the label failure to thrive.  Which means he's not on growth charts for weight.  Something that also is common which children who have althetoid cerebral palsy movements who aren't able to really keep their bodies still.  So we're hoping with the assistance of a nutritionist that we'll be able to find some ways of adding additional calories to Noah's diet.

On the equipment front, all was going beautifully with Noah's hi/lo base chair until the equipment vendor came to make some modifications because it was still "too big" for Noah.  They shortened the leg rests, which was great, however the headrest still wasn't what Noah needed, and I had to take out the extra padding that was added so Noah's neck didn't fall backwards.  As a result the side laterals are too far apart and he's now self-injuring his poor little wrists under the arm chair rests and getting his arms stuck at his sides.  And the icing on the cake was during dinner when his harness strap just flat out broke out of the blue leaving his head leaning to one side tonight.  I'm praying for a quick fix and that the equipment vendor having spare parts of some sort because the idea of having to wait for Medicaid approval for a replacement is terrifying... nothing moves fast in the world of waiting approval on parts.  Everyday is filled with tons of challenges when you have a child with special needs.

Noah's little brother has been wanting to give me an extra set of hands lately, something that is rather bittersweet.  Such a tender young age to recognize that your older brother has significant needs, and lacks the ability to do things that can.  Luke wants to bring him toys to play with him on the floor, wants to help me hold his bottle and even try to assist me with taking his diaper to the trash.  And while I love his beautiful and loving attention to Noah, a part of me can't help but be sad that this is our family dynamic - that his little brother has to bring him toys so they can play together.  I read this quote the other day about brothers I seen in a magazine.  I cried for a long time, there are just certain things that tug at my heart always: 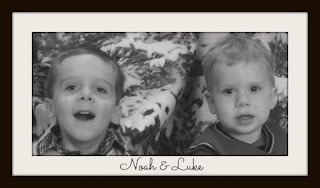 "My brother is my friend, he is my heart, he is my world.  He has my heart.  We run, we cry, we play, we laugh, but at the end of the day he will always be my friend but mostly my big brother is here to stay." Allyjah Cutts

Every bit of it is true.  Noah is the center of our universe, he is the very heart of our family.  He means everything to all of us.