Perhaps it's been too long since Noah was really sick and I just became too comfortable in stability. Or maybe I try to purposefully block out the scary dark corners of his fragility so that I'm not overly frightened of what I know could happen in situations like these. I knew something was wrong by the sound on the monitor. That gasping, choking, blockage of airway sound that he makes. I ran as fast as I could, leaping over a dog in the dark hoping I could get there faster. It wasn't fast enough though, whatever had caused the airway blockage whether it be secretions or acid re-flux or a vomit that never made it to the surface of his mouth, it landed in his lungs- aspiration. I sat him up, yet I could still hear him struggle to clear himself. His father, looking on at us both in the doorway of his bedroom as I cradled him on the floor. We both knew. But had no words to even say in the moment.

The following morning it was obvious that something was wrong. Noah's happy spirits were diminished. He was in and out of episodes of sadness, his motivation to furiously tear apart pages of coloring books had just vanished. And he just laid there looking at us as if the a bigger storm was brewing. Noah was giving us all the classic signs of things were taking a turn for the worse.

We offered him a walk to give him fresh air around the block. Afternoon storms almost like clock work now, were moving in all around us. Dark heavy clouds, that were wispy and full of rain danced above me as if to remind me of my perpetual life's storms. We turned the corner on a path that leads to open space for as long as you can see. It's like looking at the ocean's horizon except it's all field for as long as you can see. And along the path every ten feet there are massive lilac bushes. The bushes so well established they are enormous in size and in full bloom. Their scent was overwhelming. Although pleasant under most circumstances, I found their alluring perfume to be invasive on my mood. The smell of something delicate and beautiful while I was under moving rain clouds above me, seemed off-putting. Almost as if nature was mocking me and laughing at my inner distress.

Noah's cough presented itself loudly, almost as loud as the thunder in the background. I watched his little brother ride ahead of us on his bike focused on his little legs pedaling. Keep pedaling I told myself. We passed a new dog behind a residential fence on the path. Must be new neighbors. The dogs prior were obnoxious and loud and very ill mannered. They would startle Noah every time we walked by with their barking and antics. This dog, a pretty Irish Setter, stood stoic in one place right at the fence almost as if he was paying respects to Noah as he walked past him. I wondered what his name was, or even how much I appreciated his calm demeanor as we passed by.

Noah coughed again, and my mind shifted from the dog to what my mind just wanted to forget. Noah was sick.

Heavy guilt exists, like if I could have gotten to him more quickly, if perhaps if I hadn't fed him ice cream at the zoo too close before bedtime with a spoon he wasn't familiar with, if I had done this or that - then maybe the outcome would be different. An all too familiar feeling that I carry like a gorilla resting on my chest for years. If only I had birthed at a different hospital... if only I had looked at the ultrasound monitor myself... if only...

I dreamed of heavy rains falling down on the lilacs. They still smelled fragrant, and the moisture from the rain made them only intensify in deep purple color. Lightening hit a nearby tree, and I was awakened to the sound of Noah needing me in the night. A low-grade fever. I reached for the liquid suspension Advil only to find it had been expired since February of 2018. Over a year expired. I googled quickly the safety of an expired medication, and felt comfortable enough to give it to him in a pinch. He fell back to sleep rather quickly as I sat up in bed just thinking of those lilac bushes in the rain.

It's odd where our mind wanders in times of great stress and fear. We fixate on things in the moment -- a bird... a lilac bush in the rain. 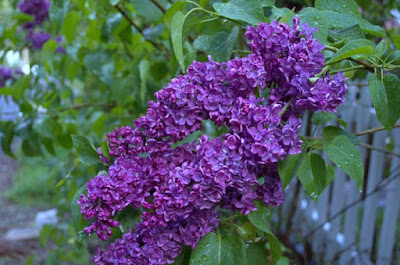