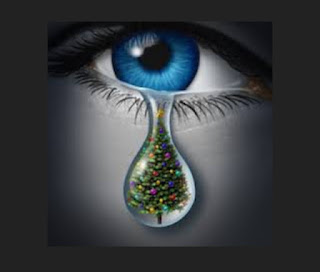 Luke, as most growing children do have an innocent curiosity about them.  He thinks absolutely nothing about blurting out "tell me about Noah's first Christmas" at the dinner table - nor should he.  A question that shouldn't be a big deal for most, feels like being hit with a giant unexpected boulder out of nowhere.  Those questions - those unexpected questions that you just either aren't prepared to answer or don't want to answer, or even a mixture of both.  Chris took the lead, much to my relief.  I didn't know where to start.  The pain inside me says let's skip to the easy parts, the hard parts need not be mentioned for the sake of all involved.

"We celebrated Christmas late," Chris explained.  He went on to address Luke's puzzled expression, with a follow up that Noah was still in the hospital at Christmastime, so we celebrated in January when we got to bring him home.  Luke seemed confused on how one could celebrate Christmas in January when it should have been over.

In my mind I'm pushing down memories, terrible ones as the two of them converse.  The kind like where it all flashes before you again, the priest, the rosary, that call saying he's not going to make it through the night, the demands for a blood transfusion to try to keep his organs alive because every part of him had been so deprived of oxygen - the parade on television, being alone at the hospital without anyone, wondering if my husband and son were fighting hard at another hospital, wondering if I would even make it through any of it.  None of that could ever be explained to a sweet eight year old child at the dinner table.

I appreciated Chris skipping all of that to just explain we delayed Christmas for Noah.  Chris no more wanted to dive into the complexities of pain than I did.  Some traits are probably specific to how parents like us process continual and ongoing pain - because that's really what it is, ongoing.  And some of it could be that we've learned this way of suppressing past pain so we can get through each new day.

It bothered Chris in the same way it did me.  I could tell.  He made an off the cuff comment not even an hour later saying at least Christmas would be over in one more week. Luke asking him to build a gingerbread house and Chris saying lightly and softly with a retreating voice, "not tonight." I know... perhaps in the same way Chris knows the month of December is just hard.

It's really almost hard to even put into words sometimes, that tug of war with being so incredibly joyful about Noah and his life, and the fact that he's turning eleven in three days.  A milestone in which neither of us thought we'd ever see.  Eleven.   How beyond blessed we are for eleven amazing years with this beautiful little boy. But it's that tiny tug that creeps up when you least expect it, the tug that says it could have been different, that tug of guilt that plays "what if" with my soul.  The regret that I didn't know my own baby was in distress, that I couldn't save him from this forever fate.

December pain exists for so many families, Christmas for us is very complicated.  We are in a season that is naturally supposed to be sprinkled with joy and magic, and we're pushing through what sometimes feels like a perpetual emotional blizzard.  We are neither between Grinch or Fa La La La - but in this sense of feeling like you can't catch your breath.  Christmas cards go unopened, bills stack on the counter, gifts that need to be wrapped feel like they are screaming your name and you just want to see it through.

December can feel like onion layers at times, SSI battles, Medicaid appeals, durable medical equipment appointments, credit card disputes, therapies, private battles, and you're navigating circumstantial things with this pain.  And then there's the parts that are still overwhelming but in a good way, the boys having breakfast with Santa, seeing the excitement that exists in both of their eyes, North Metro Fire Department coming to celebrate Noah's eleventh birthday --

January is right around the corner I tell myself.  Hold on until January and some of this pain might get packed away just like the Christmas decorations for another year.  Stored and packed away in a little box that is in my heart.