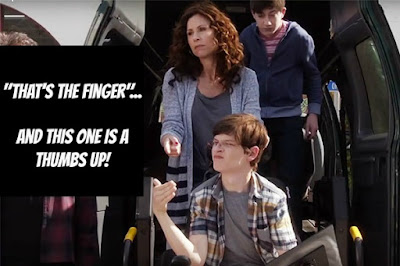 I won't try to minimize my growing excitement for the new ABC Sitcom Comedy, Speechless which makes its television debut September 21st.  It is incredibly rare when a television network takes on programming that doesn't just simply throw in a token disability in the plot but showcases the disability and makes the person the primary focus in the show.  The trailers have been a fantastic tease offering a realistic but hilarious glimpse into situations that are tremendously relatable if you have a child with special needs, - especially one who is both in a wheelchair and non-verbal like Noah.  ABC has done a great job with building anticipation and a developing a fan base that I think will not only appeal to special needs families but also to typical families who may not otherwise be familiar with many of the realistic challenges that we face daily.  Some situations so absurd one might think we are exaggerating for comedic effect - but oh how true it all is.

I had the opportunity to view the first episode today, via an Amazon invitation.  Wasn't about to pass that up on a Friday.  Nope this special needs mom spent nearly 22 minutes (commercial free) laughing and relating to a day in a life that resembles my own.  And then I spent another nearly twenty-two minutes watching it again with Noah, his grandmother and Luke.  They all were glued to it just as much as I was - Noah uniquely so.  He has never in his life seen a family dynamic that resembles our own.  He laughed and was engrossed in the show.

*** Spoil Alert ***
Speechless opens as the family moves in order to provide more resources for their disabled oldest son, JJ DiMeo, played by Micah Fowler, who also in real life has cerebral palsy.  The house is less than ideal.  It's doors are falling off the frames, the deck is missing, they have a cell tower camouflaged as a tree in the backyard, and their home backs up to a very busy street and train tracks.  Yet in the name in the spirit of giving their special needs child all the opportunities that he deserves the entire family bites the bullet and pulls together to do the best they can with these sets of homestead circumstances.

Minnie Driver plays Maya DiMeo.  She is extraordinary in her role.  It is as if she literally shadowed a special needs mother for months on end, or had her own special needs child herself.  Her firm and unique understanding of her character is quite amazing.  She accurately depicts the fierce advocate drive that you find in most special needs mothers, mixed with a dash of humor, and sense of authenticity that makes her feel as if she is you.  Minnie was an excellent choice, and I'm going to look forward to watching her speed from place to place during each episode rooting her on as she continues to avoid countless and likely well deserving speeding tickets all in the name of awareness, disability rights, and unconditional love for her entire family.

Minnie's character without so much batting an eye cares very little about her reputation of being "that aggressive and difficult mom," but instead embraces it and wears the title proudly on her sleeve.  I enjoyed how she depicted our drive for change out there on the lawn of the school with her paper petition scouting for signatures all the while showing no remorse for stepping on the schools freshly planted flowers after realizing that her son's only way of entering the school building was by way of a trash ramp that the school district found was "acceptable alternative access."  Minnie's "schooling" of the staff became a comical scene that not only does a great job of demonstrating many of the illogical and unfair challenges we face as parents of children with disabilities, but does a great job of giving all viewers regardless of their family dynamic something to really think about and digest.  And that is the biggest thing the disability community could ever hope for with a sitcom like this.  It is a teaching tool for people.  I hope that it gives all viewers a half hour of entertainment mixed with food for thought so the next time they walk into someone like us they know what walking in our shoes really is all about.

John Ross Bowie, who plays Jimmy DiMeo - JJ's Dad does a great job of being Minnie's parental sidekick.  You can tell his character is quite familiar with what will push his wife's buttons like the use of the word "cripple."  You can see him roll his eyes and his body language says you just dug your own grave because my wife is about to have a field day with you.   A strong family man who stands proudly behind his wife's efforts and knows that no matter her choices that at the heart of it all she's doing the best she can.

In the first episode we get to see the classic nut case therapist.  We've all been there.  I've been there way too many times I'm not even sure how I have survived some of them or Noah either... It is good to see that the show is incorporating all real elements to things that we face daily - including a batty, overexcited therapist that would love nothing more than to be fired because she just isn't in to her job - your kid - or your family.

The show also pokes fun at the classic "you are an inspiration," and "pretending to be inclusive" themes.  On JJ's first day of school the family is greeted by the school principal who thinks that comparing the school's change of mascot is the equivalent to representing inclusion.  The mascot has been changed from a Viking with its connotations of male aggression to a sea slug which has both male and female genitalia.  The awkwardness in Minnie's expression and her quick change of topic classic of how a special needs parent would react to the strange insinuation that inclusion was in any way related to a sea slug that possessed both genders.

The first episode also explores secondary challenges to special needs parenting.  I always say when you have a child with a disability the entire family has a disability and it will undoubtedly effect each family member differently.  Sibling feelings and emotions are explored, bonds are shown to be powerful within the family unit, and an overall showing of support makes the family strong.

So how real is Speechless in representing the special needs community?  I'd say it nailed it - at least for me.
The show will be a big win with special needs families and something like this is so overdue in television programming.  I hope to see this sitcom have a long run on the network.  Don't forget to tune in September 21st, and for those of you who can't wait.. you can watch it at this link. You won't be disappointed.