I was really excited to watch the new series Raising Dion on Netflix.  Besides personally knowing the little girl who plays a supporting role in the show, I was very pleased that the show cast a character that both has a disability in real life and in the series.  Sammi Haney, plays a little girl named Esperanza, who is a friend of the main character, Dion. 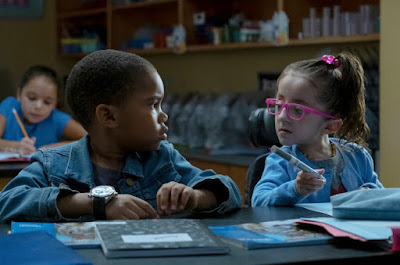 The premise of the show is a boy that has the sudden onset of super-natural abilities, and the complexities of having those "super powers" as a child learning to navigate them, and how his widowed mother learns to cope with her child now being a very different little boy, than the one that she was familiar with.  The show introduces Sammi's character rather early in the series which I was glad to see.

However, my disappointment grew with each additional episode.  The story line was pretty predictable and felt like almost like a copy-cat to most super natural television these days. The acting from all the children was strong and their chemistry matched well with each other. Watching Sammi act was much like knowing her in real life.  She's just naturally this charismatic sweet child, and you can't help but fall in love with her.  She's a child that exudes positive energy and happiness.  If it was dark out she'd literally light it up with her personality like a glow stick, so I'm not surprised that she was chosen for this role.

That's part of the reason I'm let down with the series.  They had this huge opportunity to showcase her more, and she became almost hidden in the background, with what felt like a guest appearance here and there.

The character of Esperanza is depicted as a child that sees herself as "invisible." Her peers primarily ignore her, in fact even Dion finds her annoying and through the majority of the series does his best not be associated in any way with her as if she's an embarrassment.  It isn't until she serves Dion in attempting to retrieve his asthma inhaler during a crisis at a birthday party that he even gives the friendship a chance. The show has this precious character in Esperanza and no one really wants to be her friend - not even Dion in the beginning.

One of the most redeeming scenes was one with Esperanza and Dion happily sharing birthday cake in the back seat of her dad's van.  I also think they did a very poor job with the whole accessible vehicle when it came to how Esperanza was transported around.  There are scenes where an apartment neighbor whom Esperanza's father doesn't even know or is connected with is instructed to drive the family van to get her to the birthday party.  It was unrealistic that any parent would hand over an accessible vehicle to a stranger they didn't know to drive their disabled child anywhere.  Especially without any explanation as to why Esperanza's parents weren't the ones driving.

The show had a perfect window of opportunity to show out of the gates that children with disabilities have just as strong of friendships as those without, and blew it.  Instead they made Esperanza a cast out of sorts, coming on strong wanting Dion desperately to be her BFF, despite his first rejections of that idea.

The show also took a turn I didn't really love.  Instead of focusing on this great story line with a child with a disability as a supporting character, they decided to focus on racial profiling, which had nothing at all to do with the story line.  It felt forced and out of place.  As if they threw it in there to support a climate of intolerance.  I didn't love it.  And then they took it step further to imply that if you have felt that you were wrong by a racial feelings, that revenge was perfectly acceptable as another character trips the offender in a school hallway as a payback of sorts.  For a Netflix series dealing with a story line involving very young children that all just missed the mark terribly for me.  It really was an out of place "problem" for the series and didn't at all fit whatsoever with the point of the theme.  The last thing we should be promoting is a revenge-like thought pattern to a childhood school injustice.

I kept eagerly awaiting for them to touch upon Sammi's diagnosis, or a better explanation of why she was in a wheelchair.  Sammi Haney has a Osteogenesis imperfecta (OI), also known as brittle bone disease.  Never once was her diagnosis ever discussed much less mentioned and Netflix had the perfect window to spread awareness about the condition and just fell completely flat.

There is a moment when Dion uses his powers to assist Esperanza with floating and standing as if he wishes to see her walk.  Esperanza gets very hurt by this, and it causes some minor hurt feelings.  Dion reflects on his actions with the help of his mother's feedback and decides he owes her an apology where he explains he realizes she is not broken and doesn't need to be fixed.  And while true, those with disabilities don't need to be seen as broken, in some aspects the condition of OI does cause bones to break more easily.

I'm really hoping there is a season 2 for Raising Dion because they underutilized the character of Esperanza, and they could have really done better showcasing a character with a disability.  Raising Dion was highly predictable and the use of the music theme used in another Netflix series Stranger Things, was a dead giveaway to the hidden villain.  I wouldn't have stuck with it, had it not been for desperately wanting Sammi Haney's character to be given more screen time.  She was just sprinkled about almost as an after thought or what felt like a move to have one foot in the door with the disability community.

Dear Netflix, you can do a million times better.  Now get that Sammi Haney a leading role or at the very least show us that you can step it up with a season 2.  Don't leave Esperanza behind so much in the background.  And fix the tone you left us with that those with disabilities are friendless, invisible and annoying.  They are anything but.

While I had hoped it would be a great family series for my children to watch, I can't say that it meets the mark of the theme I wish my children to see.  I don't like the racial profiling theme nor the depiction of revenge.  I don't want my children to think that those with disabilities naturally are friendless or have to beg for a friendship, or to be seen as annoying or an outcast of sorts.  And the super-natural part with a person in a position of trust being the villain made me very uneasy.  You have a very small child essentially engaging via texts on an IPad messaging game with someone he thought he could trust who wants access to kill him.  Netflix in my opinion shouldn't be marketing this as kid friendly, it was much too dark with tones that simply didn't have as much of a positive message as they needed to have for children.

Here's hoping Netflix steps it up next time.  This one misses the disability mark.

The Nightmare called "The New Target"

I don't think many people relish change.  But in the land of special needs sometimes the word change can send shivers up and down your spine as you anticipate the shrill and shrieking of your child with special need's screams if the unfamiliar gets yanked out from underneath them.

I kind of feel that same way with Target's new store make-over.  It seriously feels the moment you walk through the doors like someone put you inside a snow globe and shook it up while you're spinning around dizzy.  What the hell? feels like an understatement.  People are raving about how some Target stores now have a Disney section, and how home decor just now sprouted as if Target just became a wannabe furniture outlet in the middle of retail clothing and home goods.  Wasn't it enough to mix grocery and retail?  Really Target.  You are blowing my ever loving mind. 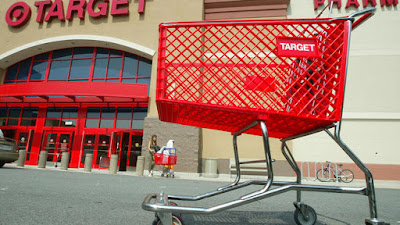 And I liked Target.... the old Target that is.  It ranked right up there with my top fav's alongside Kohl's and continuous trips to Starbucks.  And as much as I dislike the special needs poem Trip to Holland, Target feels a lot like that.  I expected a normal trip.  A familiar trip.  A vacation to potentially a mildly redesigned store, that had more clothing and shoe options and maybe even sprinkled with more organic food inventory.

What did you do to me Target?  I can't even find the baby food section anymore.  As my child in a wheelchair stares at me like he's also landed on Mars.  Nothing makes sense.  The layout is disjointed, the isles go sideways and horizontally, and before you know it you're staring at kitchen spatulas when all you wanted to do is just find paper towel.  And it's not all that wheelchair friendly.  You can easily get stuck on an isle with a grumpy person staring you down so you know your only alternative is to throw that wheelchair in reverse and attempt to find yet another small isle to see if you can get down.

Why Target?  Just why?

This totally took your ranking of one of my top stores down to at least 15.  I don't have the time to spend three hours touring your store for the 5 things I simply need on my list before I both have to feed my child and sprint to his therapy.  I miss the store I once knew.  I miss the feeling of it being simple and easy, and now it's complicated and hard.  And I have enough hard in my life everyday Target.  From the moment I get up it's hard.  Now you have to make my retail experience hard too.

While I pout I will at least give you credit that you didn't eliminate Starbucks and that that my internal GPS can at least still scout that out, because right now that feels like the only benefit to even walking into your store.