As a special needs parent, I occasionally hunt for items that I wish existed.  In my mind I dream up the perfect item that would solve all of Noah's problems.  And sometimes I get lucky and find that it does in fact exist.  It's not a surprise that Noah isn't fond of wearing typical shoes.  While he can tolerate Piedro orthopedic shoes (quoted at nearly $500) while he is using gait trainers and standers, he has difficulties loving shoes while we're out in public.  Winter is coming.  Slippers fall right off of his skinny, small feet.  Socks alone are too thin to keep him toasty, and wool ones make him crazy

I think I was googling Sherpa lining... when I stumbled on Feejays.  Yes, internet searches, while overly time consuming in a special needs parent's day, can prove to be worth while - 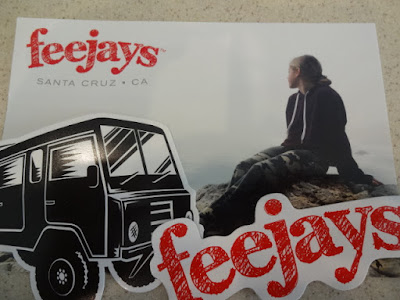 Feejays are sweatpants with super cozy, ultra plush, sherpa fabric lined feet!  The feet can also be pulled back if you'd like to set your little toes free and put on shoes to cruise outside.  For children with special needs who aren't a fan of shoes, or like Noah who also have difficulties regulating body temperature and need extra warm clothing Feejays are a must!

I have been so impressed with them.  They wash and dry beautifully and maintain their softness.  In fact, I'm so envious of Noah's comfort in Feejays that I want a pair for each of us!  I envision us all lounging together in our Feejays sipping hot chocolate as we watch the snow fall this winter. 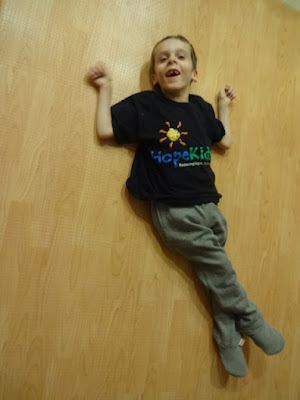 Feejays would make an excellent Christmas gift.  Feejays has extended an amazing offer to all of Noah's Miracle readers by offering a discount code through December 10th.  Just use "SMILE", as the discount code at checkout and it will provide 15% off your entire order!

This is one item you'll be super excited about having under the Christmas tree this year.
It is one of those gifts that is perfect for everyone.  I can't wait to grow Noah's collection of Feejays!

Noah's 7th Halloween down in the books of special needs family history.   I feel like Noah is my constant teacher.  But instead of just giving me the answers when I'm wrong he forces me to learn via trial and error.  After six years of trying to put Noah in Halloween costumes (minimal at that), Noah just couldn't get past that dreaded sensory gag reflex that led to uncontrollable vomiting.  Year seven - I thought I'm simply torturing this poor little boy all in the name of a silly holiday ritual in which kids gather too much sugar by holding a beggar bag at someone's front door.

This year, we were blessed with a foundation who provided a Rolling Buddy costume for Noah.  A really cool airplane that attached to his wheelchair.  Noah only has one wheelchair with arm rests (because he wraps around his arms - even with arm blockers and hooks himself).  I had a base but no seat on an old model Noah had outgrown.  It took many months but I at least got a seat for an old frame.  Although it has Noah's name embroidered in the back he's acting as if it doesn't belong to him.  I suspect that the harness is not comfortable and is a sensory trigger for him - and the seat came too small - although he fits on it, the seat is make-shift at best.  The chair of Noah's dreams?  I think not.  He rejected it and thereby rejecting the only wheelchair ride he has that could even attempt to accommodate his airplane wheelchair costume. 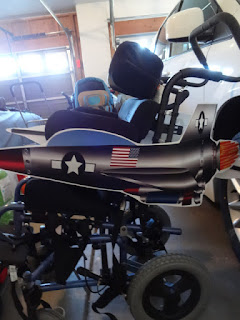 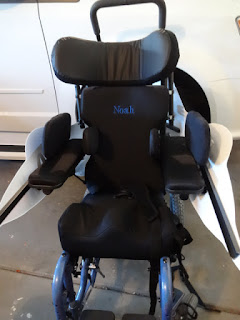 Yet a certain sadness loomed in Noah's eyes.  An understanding of being left behind.  A look that will tug on every single heart string any mother has.  Chris and I looked at each other trying to figure out a plan.  What do we do?  We risk him gagging and being on sensory overload if we leave the house.  But create a painful childhood memory for him if we were to leave him behind.  So, the decision was made Noah would simply walk around the block with us, without a costume in the wheelchair he is currently most comfortable being in.  We took two Halloween bags, Luke was so on point one would have thought we coached him into making sure Noah was also presented with a piece of candy at each home.  Even if a neighbor thought or assumed perhaps Noah didn't need a treat, Luke was quick to say I need one for Noah.   Perhaps those words coming from an adult may have been perceived as rudeness, but out of the mouth of babes and a devoted little brother - was remarkable. 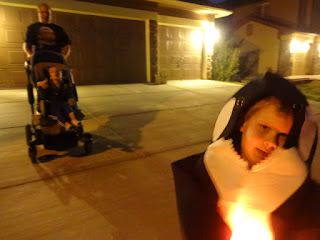 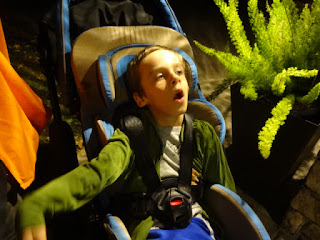 Noah full of smiles and laughter - perhaps more so as he realized Luke had his back, found his way to being fully capable of handling each time someone opened their door to greet him.  Granted, that was done with generally some significant distance as the homes in our area are full of a multitude of stairs just to get to a front door.  But we still made it work.  Noah was doing so well in fact that we went around the entire block.  The darkness and comfortable temperature likely helped minimize and defuse sensory overloads.  I must admit my neighbors go all out for Halloween - I had no idea I feel like I live in a box and haven't been able to join the masses due to Noah's needs.  One home had a set up that I swear was like watching poltergeists march back and forth in their upstairs bedroom windows.  Cool, freaky and totally effective in giving the oldest of adults goosebumps.  Who knew that such decorations even existed!  I can't say that I wasn't intrigued enough to spend an extra amount of time in their driveway watching their fake spirits pace back and forth.

I'm not sure what it is with that big bad motion detector spider that jumps out - but that darn thing made me jump; it made Luke tear up; and Noah laugh hysterically at the fact that his little brother almost peed his pants.  Was a typical brotherly moment.

Chris wasn't exempt from his own neighborly nightmare - a man without a face standing in the middle of the street to scare a passerby. His movements so classic horror movie that really it was truly disturbing on every level.  We both wanted a way from it (him/her) quickly.  The boys likely less affected than us - ironically.  But mom and dad got the heebie jebbies.  In fact thinking about it makes me want to crawl under my covers. 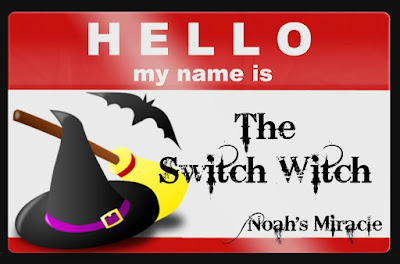 The boys came home with generous amounts of candy.  Although Luke can eat candy, Noah watches with tremendous envy.  We scooped up Luke's entire loot and passed him only a mini bag of M&M's and put the rest on top of the refrigerator - out of sight out of mind.  Noah's face showed a sign of relief.  He didn't feel as if he was doing without.  And then the Switch Witch was put on my field of vision... finally like this giant light bulb went off.  The Switch Witch could come and take all the candy away and leave Noah and Luke both mutual non-edible gifts.  That is like special needs parenting perfection.

Both children on equal ground, both children get workable gifts, mom even maybe avoids an unnecessary trip to the dentist... dad scores because he can donate the candy to his work - it's like a win win for everyone!  I just might give the Switch Witch as much of an even playing field as the Tooth Fairy.

I'm just glad we made it work.  I'm glad that after all these years that Noah didn't get sick or have to suffer through a Halloween.  That perhaps allowing Noah to be just who he is - all 365 days of the year is what he needs - and that's okay.  There is nothing saying that our Halloweens have to resemble anything "typical."  Being the norm is over-rated anyway.

-A bit of special needs unpredictability - now that's how we roll.

Looking for other creative candy donation options to dispose of candy for your non-oral eater?  Check out Candy for Heroes