Make No Mistake the Inner Bitch is Sometimes Dormant, but Never Dead

It's been a long time since my last public blog.  Even though I blog a lot in my head, or on paper, and notes that swirl around in my mind.  My subtle public quietness isn't because there hasn't been anything worthy of discussing or throwing out there into the world, but more rather methodical thinking.


While lots is new, some things aren't.  The same old fighting for your child with special needs always ongoing.   That's never new.  In fact, it often feels so ridiculously old it's like playing the same sad damn song over and over and over again until you have the words so sickly memorized in your mind.  It's exhausting.  Lately, I have found myself requesting less, pursuing less, asking for less because of the pure hassle of the battle the ensues when I do.  It's comes with such predictability - one that is never just easy, smooth, or even anything that makes much sense anymore.  Sometimes however, I don't even have to ask for the fight.  Sometimes the fight just lands on my doorstep.

For example, Noah had been receiving diaper wipes on a Medicaid Waiver program called CES (Child Extensive Waiver).  It really provides for many of the things that traditional (EPSDT) Medicaid doesn't cover. Kind of like a catch all for additional needs, like respite, enhanced homemaking, adaptive recretational, dance, music, and movement therapies, medical supplies etc.   Noah has been receiving diaper wipes since around 2014 - so a long while.   His CCB (Community Centered Board who manages his CES Waiver), had been providing them through Amazon purchases that were just sent directly to the house.  About a year or so ago, they found a vendor to supply them, as a means to reduce costs.  It's always about how much money they can save (and or pocket depending how you look at the transparency of things).  In that short time Noah's particular brand was being supplied through the vendor, however without warning the vendor cut off that brand and went to generic or limited brand supply.  The CCB was unsuccessful in finding any other vendor to supply wipes because they just don't do it.  Rather than go back to ordering through Amazon like they were previously doing, they stopped his deliveries with the excuse that (ESPDT) traditional Medicaid should now fund them.  Now we all know, in special needs parent land that Medicaid doesn't supply diaper wipes.  Bummer but they just don't.  They supply diapers but not until after the age of 4, with the reasoning that we should naturally be diapering our children until of natural potty training age (even if our children have zero hope of ever potty training).  But that's the stupid rational they use for the age requirement.

True to my style, when you piss me off - I will shout it from the roof tops and I will pretty much involve and include everyone in the circumstances so that everyone can see the blatantly stupidity of the situation.  It's really been my policy if you don't want the world to know what you're doing to Noah then you're better off just providing it or I will make a big scene even if that includes the media, or doing news interviews.  I don't play games, and will broadcast the injustices that happen to Noah.  I have nothing to lose, as the State has already identified me as a "problem advocate parent" years ago so I already have that reputation of being a fighter parent.

So in this argument of who should continue providing Noah diaper wipes as he went without an order for months, Directors and Specialists at Colorado HCPF, passed and exchanged emails back and forth, deferring to each other for guidance.  This was their determination:

"Department DME and EPSDT policy staff have confirmed that while wipes are not a covered benefit under the DME, state plan benefit, they should be submitted with an EPSDT exception request for all members under age 21.  If the wipes are denied with the EPSDT exception request, they may be covered under the Specialized Medical Equipment and Supplies (SMES) beneift available through the member's waiver.  Wipes mayt also be funded under the SMES benefit if the member has a documented provider access issue by noting which DME suppliers were contacted and their responses.  Either the denial or the access documentation should be noted in the BUS and kept on the file at the agency in case of an audit, and it must be updated yearly with the new service plan.  This will help conserve the waiver funds for other services."

That's all fine and dandy, however there are no vendors that supply wipes, and I never ever heard of a family getting an exception granted for diaper wipes through Medicaid.  They just don't supply them and no one at EQ Health is going to stamp an approval on that.  Those fools won't even approve a new wheelchair for Noah due to growth - as a medical necessity.  Instead their rational is carry him through Target - because that's so possible to carry a 10 year old child through Target.

To add insult to injury, the program administrator for EPSDT in Colorado for Children, replies that "EPSDT is that best kept secret kinda thing," implying that the help is there, we all are just sort of kept in the dark about it.  No fault of their own of course.

So really the question comes down to, is Noah being singled out?  Perhaps.  I haven't heard of any other families having to go to war all of a sudden over diaper wipes.  Certainly he's not the only child receiving them.  Lots are under waivers.  Hundreds in fact.  How do I know this?  Well I actually manage my own social  networking special needs groups where I advocate and guide other families and there are no reports of any other families experiencing these same problems at the moment.  In the end, after I included lots of people I know and work advocating with into these corresponding emails, his CCB has temporarily yielded and is ordering his wipes once again through Amazon, by way of his CES Waiver, not traditional Medicaid.

So all you parents out there that don't have your child on a waiver - go ask for your exception.  It's in writing.  I have it, I've read it, I quoted it.  Do it.  They say that they'll grant exceptions so let's hold their feet to the fire.  Supposedly, the program administrator states they have even made exceptions to the 4 and under rule for diapers too.  So if you have a 2 or 3 year old and need diapers go ask for that exception.  I want to see them grant it.  And if they don't let me know.  Would love to know why since they say an exception will be granted if you can demonstrate medical necessity.  Let's just work this "best kept secret" to our children's benefit. 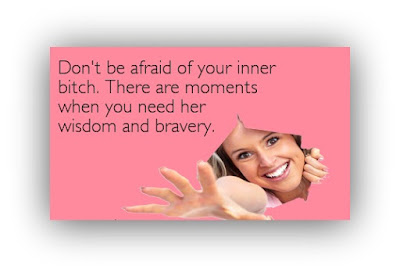 Once upon a time (pre-Noah) I wasn't like this.  I was quiet, sweet, non-combative.  I hated conflict or fighting.  I'd never sass you back.  I'd never raise my voice.  But... after Noah totally different ball game.  I have had to learn to embrace that inner Bitch we're all born with.  It's in there.  And every mother has it.  You never ever want to mess with an angry mom especially when it comes to something about providing and helping her child.  And even when I decide to take a break for my own mental health and well being and pick and chose how hard I want to fight for something, it doesn't mean I'm just going to take it laying down.  I can wake up that inner bitch at any time if I have to fight for Noah and what he is entitled to.   And all you moms out there who may come across this blog at some point in time.  Don't feel guilty for having to be that way.  Your child is depending on it.  I have tried the gather more bees with honey approach.  They don't listen to you that way.  These are feral bees.  Honey doesn't mean anything to them.  You can't sweeten them up.  The nice friendly approach isn't going to work.  You're still going to get a denial and they'll still be laughing behind a desk at your child's expense.   Trust me, I don't relish or enjoy having to go at people in this way.  But, when it comes to your child, you just can't be meek about them shafting your child.  Wake up that dormant inner bitch - and go get em'.