I Communicate When I Cry

When Noah was a baby he cried for 18 hours out of 24.  He was so distraught as a baby.  I'd bounce with him on an exercise ball to offer him vestibular input, listen to the radio in a desperate attempt to soothe, walk with him, hold him, rock him in my arms, lay him in a bouncy.  I'd do anything and everything and yet he still cried.  The first year was hard.  Until one day he discovered the world of Elmo and Sesame Street and just like that a light bulb went off for him and we found something that offered him comfort.  The TV.  I thought I was going to lose my mind.  You could so much as smile at me that first year and I would have broken down into hysterical tears.  I was overtired, feeling like I was failing, trying to navigate a world of therapies that I was unfamiliar with, a new mom to a child with special needs and dealing with the most distraught baby that you could ever imagine.

Noah is ten.  He still cries.  Not the same kind of cry as a baby.  But still cries and frequently.  As a non-verbal child, it's often his only way of communicating distress, pain, disagreement, agitation, or when he's ready to leave somewhere, or even when he's ready to go and I'm not moving fast enough for him.  There are lots of reason he cries.  Most of which I know, and some that I'm still learning.  I've never been a cry it out method mom.  Even for my typical child, Luke.  To me when a child cries, that means that they need you in some way.  And comfort has always been what my instinct has told me I need to do.   It's still like that if either of my children cries. 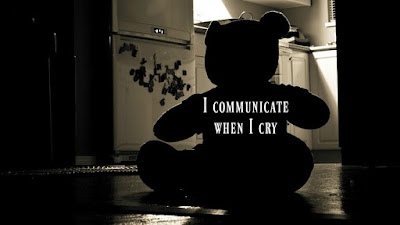 There's been a lot of talk in the special needs community recently - especially when it comes to a non-verbal child and do you let them cry it out?  Do you impose punishment?  Or do you console?

Noah is cognitively very aware.  He understands everything although he's trapped in a body that is physically limited and challenging in every single way possible.  Yet, he still is learning to navigate an AAC device, but even with a device - he's always going to have to rely on communicating with us through facial expressions, through vocalization tone and sounds, and through moods and emotions (example, being happy, sad or angry).  Non-verbal children just communicate very differently.

Noah will frequently have meltdowns or get angry and cry if something is wrong - like his movie ended and I need to restart it, or if he's out of coloring book pages to shred, or if his brother took a toy away from him, if he needs to be changed, or if he's pissed off that his therapist was scheduled to be here and she is sick or can't come for whatever reason, or he doesn't get Chick-Fil-A on Thursdays.

And by meltdown it's the most heartbreaking cry you can imagine.  The kind that penetrates your soul where you just ache to make it all better.  Crying it out or punishing Noah for trying to be self-expressive to me has always felt like a cruel approach.  Not to mention that if I don't find a way to soothe Noah or make whatever it is that is troubling him better, he could frenzy himself so bad into vomiting, chocking and aspirating because he gets so worked up.  Being upset to Noah poses a safety risk to himself.

You also can't negotiate with a child like Noah like I can with his little brother Luke.  I can't make deals, or bribe with treats or toys - it's an entirely different ball game.  A lot of parents take the approach disabled or not that kids are kids and both deserve to have the same set of punishments or rewards.  But raising two very differently-abled children I can tell you that rewards and punishments are not even close to being the same between a disabled child and a typical child.  Noah is by definition severely disabled.  He can't walk, talk, crawl, sit or self-feed.  I can't say to him you deserve to sit in a corner, or be banished to your room until you chill out, calm down or quit crying.  Likewise, there isn't anything Noah has done wrong other than try to communicate to me that something is wrong and he's trying to tell me what it is.  That's not a crime, never will be.  Nor do I view it as any form of manipulation on his part.  He relies on all of us - the entire family unit to assist him with his needs, his wants, and to help him be comfortable, healthy and happy.

To punish Noah for trying to vocalize a problem he is having would be a tremendous disservice to encouraging him to find ways to communicate with us - even if it's in the form of crying or screaming he needs to find ways to get our attention.  As Noah grew older, and the crying continued way past that of a normal age of a baby and toddler, I would stop and think about how I'd feel if it were me.  And I were trapped in this body, fully aware and completely unable to tell someone that I needed something or that I was upset.  And I would look at him with such admiration for not screaming every single second of the day because damn it's got to be hard to be him.  And he's really a joyful kid for the majority of the day.  He has learned the art of using the crying and screaming when he needs to use it.  It's not his state of perpetual unhappiness.

And sometimes Noah is like the rest of us - where he just needs to be held, reassured and loved on and consoled through a rough emotional moment.  I never want to find ways to discourage him from using any form of communication he needs - even if that is crying and screaming.  I don't see Noah as being spoiled, I don't see myself as encouraging bad behavior from him, and I don't see myself as a parent who is failing him because I'm teaching him that he can't always get his way.   Sometimes a child like Noah simply does need to get their way.  And that's okay.  There's nothing at all wrong with that.  He's always going to be fully dependent on someone his entire life.  Promoting all forms of communication in our house has always been our goal.  And when Noah cries, it's our job to figure out why (because there is always a reason behind it), and help him through the moment.

It might look to an outsider like we're not disciplining our child, or that we are promoting them acting out.  Know that crying and screaming for many non-verbal children is just another way of communicating. Trust that we know what we're doing a special needs parents.