Today marks the one year anniversary of the brutal and vicious attack of one of our beloved Cairn Terriers, Brystal Sonoma.   She was in the comfort and safety of her backyard when a coyote jumped the fence.  Brystal is such a soft soul.  Both of our cairns have qualities specific to my personality (as most dogs do).  Hollie Edelbrock is brave, protective, loud, loyal and loving.  Brystal is tender, wants to make friends with everyone and anything, she wants to lick your wounds, and is a natural healer and most of all trusting.  That trust allowed her to fall pray to a Coyote.  Hollie's instinct was to run for safety, Brystal's was to run towards unknowing danger in the form of what she thought was a friend.

Brystal's jaw was ripped at the hinge and broken in three places, multiple puncture wounds throughout her small and fragile neck.  Her jaw bleeding profusely hanging from her head, but still had the wherewithal to run despite her severe injuries into the house and under a bed seeking safety to save her own life.  I called the nearest emergency veterinary clinics, at 7pm at night they all denied me care due to being too busy.  I told them I was coming anyways and that I would not let them turn me away. 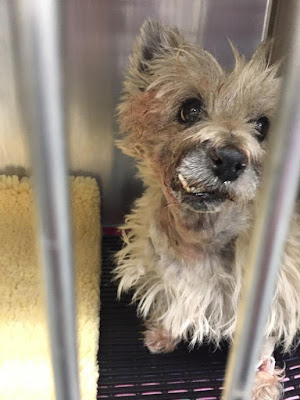 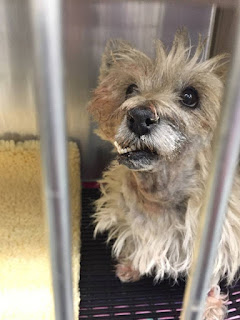 Brystal was clearly in so much pain, shaking, in shock and suffering from tremendous trauma.  But the look in her sweet eyes said nothing but please help me and that I'm sorry.   She was sorry that she was in this position, to no fault of her own.   She paced back and forth, breathing heavily through the pain.  It felt like it took forever to get her the morphine she needed to ease her pain until we could truly assess the extent of her injuries.  The emergency clinic worked fast, xrays were done on the spot - the prognosis a bit grim.  She was stabilized overnight, but her injuries were so extensive that no local vet could assist.  The vet didn't give us many options or hope, it was rather the secretary who whispered take her to VRCC - Veterinary Referral & Critical Care.  And told us they would be able to help.  The drive was super far, and my husband and I left Noah and his brother with respite, and made the long hour drive there. 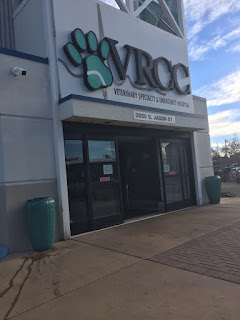 They assessed her quickly and made the determination that they thought that they could fix her - that she had the small potential to survive.  But it would come at a great cost.  It was already $2,000 to get it through the night at the emergency clinic, we were facing another $4,000 for life-saving surgery of repairing her jaw, and then another $4,000 after that for reconstructive internal mouth surgery, and bone grafting.  No one wants to hear that, especially when you are a special needs family who is already financially struggling with out of pocket medical, therapy and equipment expenses not covered by insurance. 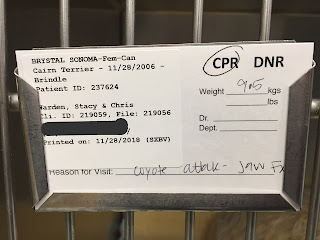 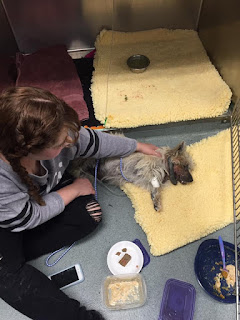 But we believe you can't put a price on a life - not even a dog's.  Every single life should be fought for - and God willing you figure it out as you go. We consented to the surgery and the costs and less than two hours later Brystal was in reconstructive surgery.  We sat, we waited.  We stayed until she was out of surgery and it was a success.  They drilled through her jaw with an exterior x-fix, and braced the broken jaw and placed it back in place.  She looked terrible, and the device looked heavy and uncomfortable.  But, we were far from out of the woods.  The chance for infection high, we'd have to figure out how to get her to eat - and stabilize her for the next four months until she could heal and have additional surgery to remove the x-fix and then reconstruct the inside of her mouth with bone grafting and tooth removal. 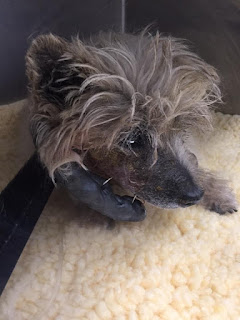 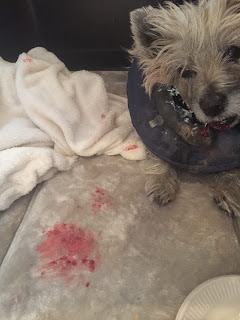 Brystal is a non-complainer.  And her tolerance for pain much higher than our other cairn terrier.  Her will to live also significantly stronger than what I think our other cairn could withstand.   If any dog had a chance it was Brystal.  The world's smallest fighter.

I've seen that same fight drive in Noah.  That will to live.  That I will fight at any cost to be here - even if it's not perfect.

I was no stranger to that fight drive, and so I made the decision to fight alongside and do what I could.

It was a very hard first few months.  Brystal wouldn't eat, I was forcing syringes full of water to keep her hydrated, and ultimately had to resort to pureeing all her food and syringe feeding her that too.  Slowly she'd eat strange things like tiny amounts of canned tuna, or sliced deli turkey.  We tried every soft dog food brand on the market, I must have spent hundreds of dollars trying and trying some more.  I tried to put the costs out of my mind and just do what had to be done.  I know we were sinking ourselves financially even more by making the decision to save her life.  But she was family.  No one gets left behind.  Not even the family dog. 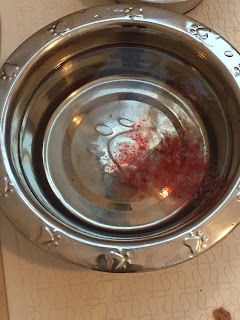 She'd have good days and bad days.  The bad days were super hard as I'm caring for Noah and then turn my back to see blood dripping all over the floor feverishly from her mouth.  Multiple emergency trips back one hour each way - determined that the x-fix had gone through several teeth and was now protruding into her tongue so every time she moved her tongue it would be punctured and bleed.  They could do nothing to prevent that or it would harm the stability of the x-fix.  So, I'd be mopping up trails of blood for months on end in addition to carrying for Noah's needs too.

I never once thought of any of it as an inconvenience or burden.  Not Noah - not Brystal.  Like a well-oiled caregiving machine I did what had to be done.  Three times a day forcing medication, three times a day cleaning her x-fix that was crusty from blood and fluids that leaked out of open drill sites on the exterior of her mouth, faithfully applying saline and antibiotic ointment.  It felt touch and go, and I did a lot of praying that we'd get through it.

And in April of 2019, Brystal had finally healed enough to have the x-fix removed, but we weren't out of the woods yet.  Two more surgeries were in her future.  She'd have to be sedated for the removal, and then was facing internal mouth reconstruction two weeks later.  She came through the removal well, we were still guarded. And two weeks later seen another specialist to reconstruct her mouth. She lost almost all her teeth, many from being damaged in the attack, many from being damaged as they drilled into her jaw with the x-fix to save her life.  But she came through both, and with amazingly high spirits. 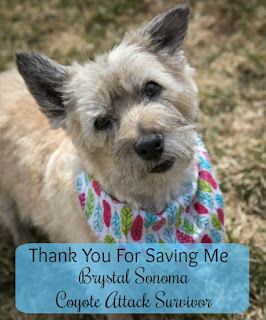 This dog is really a true testament to resilience and how much a life can withstand if they really want to fight to be here.

By the end of it our bills collectively were over $7,000.  Most of it was put on credit cards, but it ultimately resulted in us having to refinance our home over the summer.  We have no regrets.

Today, Brystal is thriving.  She acts much like the energetic little bouncy puppy that runs and skips along like a baby bunny would.  She's remains a delight to have, her spirit a reminder that you can get through the worst that life can give you and still find a happy ending.   Brystal will celebrate her 14th Birthday in March 2020.  And her age was never a factor for us saving her life.

We know that not everyone could understand or even agree with the decisions that we made to save her life, and that's okay with us.  Having a child like Noah, and having to fight for his life I think left a mark on us.  And so when someone tells you there is hope - you fight for that hope.  God will see you through, it may be incredibly hard and you may not know how you're going to make it happen or get through it all.  But, you will.  You just have to have faith.

So this Thanksgiving we are incredibly blessed to still have our little Brystal with us.  She was granted more time to stay, and we are so grateful that we more days with her.  Believe in Miracles - miracles may not come easy - but they do happen.